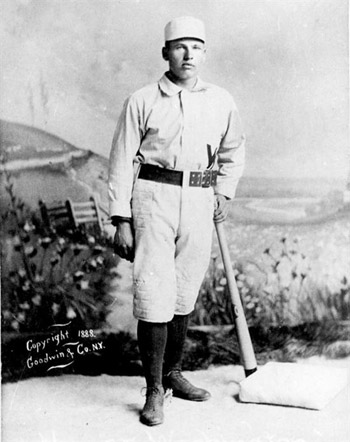 Hoy became deaf after suffering from meningitis at age of three, and went on to graduate from the Ohio State School for the Deaf in Columbus as class valedictorian.

He opened a shoe repair store in his hometown and played baseball on weekends, earning a professional contract in 1886 with an Oshkosh, Wisconsin, team which was managed by Frank Selee in 1887.

In 1888, with the Washington Nationals of the American Association, Hoy became the third deaf player in the major leagues, after pitcher Ed Dundon and pitcher Tom Lynch.

In Hoy’s time, the word “dumb” was used to describe someone who could not speak, rather than someone who was stupid; but since the ability to speak was often unfairly connected to one’s intelligence, the epithets “dumb” and “dummy” became interchangeable with stupidity. Hoy himself often corrected individuals who addressed him as William, and referred to himself as Dummy.

He was a very intelligent man. He taught the umpires to use sign language for the game, to say things like “Strike”, “Out” and “Safe”. He also taught them numbers and signs that would help the pitcher and catcher communicate during the game.

Definitely, he played a role in the use of signs during the games. There is a movement to support his election to the Baseball Hall of Fame in Cooperstown, New York. The umpires and baseball players who are using the baseball’s “sign” language nowadays should thank Hoy for establishing it.

In retirement, Hoy and his wife Anna Maria (who was also deaf) operated a dairy farm in Mount Healthy, Ohio, outside Cincinnati. Hoy had six children. One of them was Carson, an Ohio judge, and their grandson, Judson, who became a member of the Ohio House of Representatives. They also raised his nephew Paul Hoy Helms, the founder of the Helms Athletic Foundation in Los Angeles.

Hoy also worked as an executive with Goodyear after supervising hundreds of deaf workers during World War I.

In 1951, he was the first deaf athlete elected to membership in the American Athletic Association of the Deaf Hall of Fame. At the age of 99 and just two months before his death in Cincinnati following a stroke, the Reds brought him back to Crosley Field, built on the site of his former home field, to throw out the first ball before Game 3 of the 1961 World Series. He could see, if not hear, the standing ovation he received.

Upon his death that December, his remains were cremated according to family tradition and were scattered at Lytle Park in Cincinnati.

Until the 1980s, he was believed to have been the longest-lived former player ever. In 2001 the baseball field at Gallaudet University was named William “Dummy” Hoy Baseball Field. He was inducted into the Cincinnati Reds Hall of Fame in 2003.