DICAPTA: Making the Deaf “Hear” and the Blind “See”

Gracias VRS supports the inclusion of Closed Captioning in Spanish and English and of Audio Descriptions in Spanish and English in all TV programming because we all are humans and as such, have the same rights to have access to information. Guaranteeing this right provides dignity and equality to the communities that benefit from these services. That is why DICAPTA has the “spotlight” this month. For more information on DICAPTA and their services please go to http://www.dicapta.com/.

We all love to go to the movies or watch them afterwards when they are available in DVD or in our favorite streaming equipment. Being able to see and listen what happens and what is being said is a “given” for the majority of people. But what happens when you cannot hear or understand what is being said or when you can hear what is being said but have no idea what things look like. This is the reality that faces 1 in 20 Americans who are Deaf or Hard of Hearing (According to the Survey of Income and Program Participation -SIPP), 10 million blind and visually impaired and more than 50,000 Deaf-Blind citizens in the United States. So how these human beings gain access to all the media that is available? Technology and hard working people is the answer. 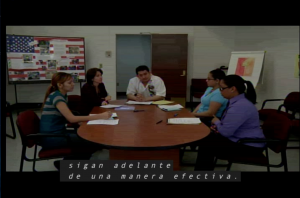 Many of us take for granted that a TV show or movie presented on TV will have captions but this was not a reality before the 1970’s. It was in 1971 that the first experiments were conducted to create what we call Closed Captions today. In 1972 another showing of this promising technology was done in Gallaudet College when they showed “The Mob Squad” (A Very famous TV series at the time) with captions. More recently in 1990, a law mandated that after 1993 all televisions with 13” or more had to have a decoder embedded on the TV. The captioning has allowed now for more than 30 years access for the Deaf and Hard of Hearing individuals to TV programming both live and pre-recorded. But what about the Deaf-Blind and the Blind and Visually impaired population. How can they “See” television? Audio Description is the answer.

Audio description refers to an additional narration track for blind and visually impaired consumers of visual media. It consists of a narrator talking through the presentation, describing what is happening on the screen during the natural pauses in the audio, and sometimes during dialogue if deemed necessary. The person that does the description translates the visual image in a way that is accessible to millions of individuals who otherwise lack full access to television and film. 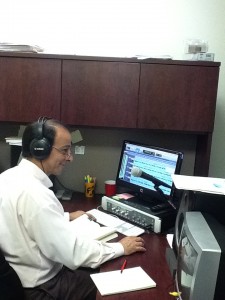 But what happens to the millions of Latino and Hispanic Deaf, hard of hearing, Blind and Visually Impaired and deaf-blind populations that live in the United States and watch channels that only speak Spanish?. They too have a right to accessibility and DICAPTA (formerly known as Closed Caption Latino) is one of the leading providers of Spanish Closed Captioned Services as well as Audio Description for this community. This fiscal year alone up to February 2012, DICAPTA provided more than 74 hours of Captioning and 285 of Video Description. Some of the channels that are benefited by this project are HITN, V/ME and TBS for FAMILY. The heart of DICAPTA is her CEO and President Mrs. Victoria Díaz Ruiz and her committed staff who spend countless hours making the Deaf “Hear” and the Blind “see” countless hours of tv programming funded in part by the Department of Education. DICAPTA also offers Real time dubbing, Remote Simultaneous translation, live on site translations and CART (Communication Access Real Time transcriptions) services. Right now DICAPTA is leading an effort to convince both the government and the privately owned TV channels that more hours of programming should be offered with Audio Descriptions both in English and in Spanish as it is not mandatory by law for the programming to have this service. The Deaf-blind and the Blind and Visually impaired population has a right to “see” television as everyone else but up to now it seems that the request has fallen on “deaf” ears.