This year’s Trilingual Spanish Interpreting Team, coordinated by American Sign Language Services, Inc. (headquarters in Florida), was the model of the RID’s and Mano a Mano’s standards for teaming, supporting, and working as a united, multi-cultural “familia.”

As this was the first time RID and Mano have collaborated on a full conference, the schedule was packed full of presentations with new information. Presented to audiences in English, ASL, and Spanish, the information included concepts of interpreting in multi-cultural settings that are universally beneficial to all interpreters.

So, starting Sunday July 17, 2011, this hard working trilingual team hit the ground running and did not stop the whole week.

To ensure everyone could benefit fully and learn in their native tongue, the Trilingual Spanish Interpreting Team moved seamlessly between Spanish, English, and ASL as needed.

They were able to interpret any tracks presented in Spanish into English and ASL. Also, any ASL presentations done were voiced in Spanish and English. The trilingual team was also on-call to voice into Spanish any RID requested workshops presented in English/ASL. It was a great example of collaboration when the Trilingual Spanish team and Gallaudet Interpreting Services (GIS) teamed up to interpret several of the workshops.

Not only did this trilingual team manage both a full-time and on-call interpreting schedule, but several members of the Trilingual Spanish team also provided or partook in workshops and leadership trainings.

The work and skills of the Trilingual Spanish team, RID, and Mano a Mano will no doubt open the door for more attendees on both the National and International level. 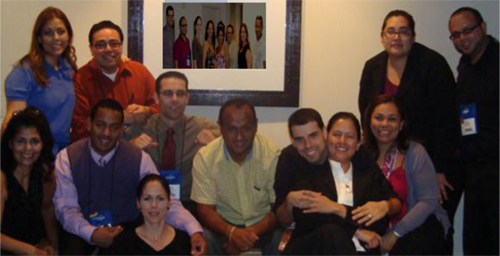 On the International scene, the buzz for North America started when Mano President, David Quinto-Pozos, announced that the Mano a Mano International Committee Co-chairs, Angela Roth (FL) and José Bertrán (PR), in close collaboration with now Vice President of World Association of Sign Language Interpreters (WASLI), Jose Luis Brieva of Columbia, succeeded in the acceptance of Mano a Mano’s application to WASLI. Mano a Mano’s joining of WASLI shines a bright light on future international collaborations and support between the organizations.

When we look at the National horizon, it was announced by RID President, Cheryl Moose, and Mano President, David Quinto-Pozos, that a “Memorandum of Understanding” (MOU) between RID and Mano a Mano has been established at the culmination of 12 years of collaboration.

And when it comes to “Thinking Globally,” RID set the standard! They announced that RID and Mano a Mano will be working together to establish more multi-cultural and diverse workshops as well as making every workshop accessible in English, ASL, and Spanish, starting with RID’s 2013 conference in Indianapolis.

We are thankful for the continued efforts and support of:
RID President Cheryl Moose and the RID Board; RID Interim Director Mathew O’Hara; RID conference Coordinator Cori Dorsett; RID Staff Member Elijah Sow; Mano a Mano President David Quinto and the Mano a Mano Board; the GIS Team coordinated by Gino Gouby and Carolyn Ressler along with the entire 2011 Interpreting Team

So mark your calendars for the 2013 Conference in Indianapolis.
Plan to join in for the continued inclusion of all cultures and languages and the ability for everyone to enjoy training and learning more about these cultures in their own language!